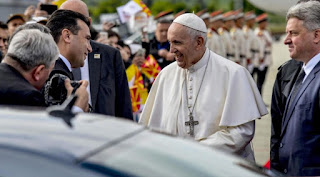 On his visit today to Iraq, Pope Francis takes a new step of peace towards being a “messenger of peace for the tired,” as he doesn’t seek to encounter the strongest of the world but rather goes to the weak ones. He declared that he is going to Iraq as a pilgrim carrying a message of love to the wounded peoples under the weight of wars, divisions and terrorism. This message is considered as an extension of the “Human Fraternity document for World Peace and Coexistence” which he signed with Al-Azhar Sheikh Ahmed Al-Tayeb, in Abu Dhabi, in February 2019.

The International Parliament for Safety and Peace IPSP-WOS, the Presidency and all members thank Pope Francesco for his efforts towards peace and against wars.